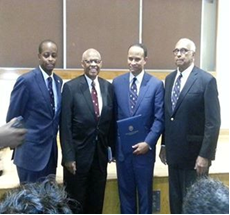 Edward E. Cornwell III, M.D., FACS, FCCM, has been named Secretary of the American College of Surgeons. Dr. Cornwell, Chairman of the Department of Surgery, was honored for this achievement during HUCM's Surgery Grand Rounds on Monday, October 21, along with former chairs of the department, LaSalle D. Leffall Jr., M.D., Clive Callender, M.D., and Wayne A.I. Frederick, M.D., M.B.A. The title of Secretary is the same title that Dr. LaSalle D. Leffall Jr. once held, before he became President of the organization. The American College of Surgeons is a scientific and educational association of surgeons that was founded in 1913 to improve the quality of care for the surgical patient by setting high standards for surgical education and practice.