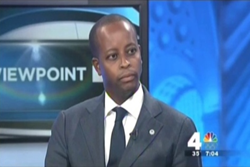 Wayne Frederick, MD '94, described himself as being "humbled and honored" as being named Interim President of Howard University in an interview with NBC Viewpoint recently, praising the way that Howard has come together as a community in the face of tough and public challenges over the past summer. He stressed the importance of Howard University Hospital as a site for training Howard students and residents and that it will continue to serve the local community as a critical component of the Howard mission. He noted that in 2013 Howard enrolled the second largest freshman class in 15 years and that the university is currently ahead in applications for this past year, crediting partnerships with community colleges, and Howard's use of technology in the classroom.