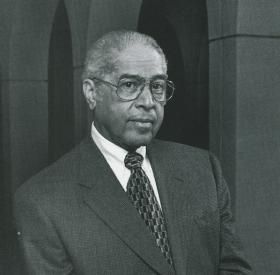 “No one could do that but Frank,” said Will Ross, M.D., associate dean for diversity and associate professor of medicine at Washington University School of Medicine. “When he was assistant director of Homer G. Phillips Hospital, he really had to move patients in and out; it was a high-volume operation.”

“He was the Jackie Robinson of the surgical profession,” Dr. Ross added. “He was the best in his field.”

Dr. Richards had lived in St. Louis since arriving here for his medical internship in 1947 until moving to Boston three years ago to be near family. He died at a care facility in Boston on Feb. 20, following a long illness. He was 90.

His surgical skills were matched only by his modesty. He insisted that no services be held. “I don’t want a big deal,” his family said he firmly asserted.

But those who knew him recall his life as a very big deal. Dr. Richards, who was black, became a renowned surgeon at a time when most African Americans did not finish high school and he quietly accumulated a significant number of “firsts.”