DR. VINCENT LUBSEY, CLASS OF 1975, LEAVES A LEGACY OF QUALITY HEALTH CARE FOR THE COMMUNITY 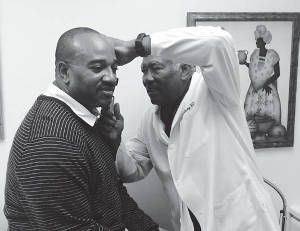 Dr. Vincent George Lubsey passed away unexpectedly on October 4, 2014 in Costa Rica while on vacation. He was 71. Vincent, along with his daughter Erika, practiced and managed the Lubsey Medical Center in Milwaukee, Wisconsin. The clinic was established in 1978. Getting to know his patients was important to him. He took pride in taking time with his patients to ensure they were educated on their health so they could live their best lives. Vincent’s life began in Content, Manchester, Jamaica on July 11, 1943. He was the son of Franklyn Lubsey, Sr. and Icilda Lubsey (nee Dunbar). Vincent has five siblings: Carl, Johnny, Norma, Margaret and Franklyn, Junior.Vincent excelled in sports, especially track and soccer, while attending Saint Jago High School, Titchfield High School and Kingston College. His mother and Aunt Mabel Lubsey Brown had expectations for him to achieve academic excellence and encouraged him to travel to the United States to continue his education. Vincent did travel to the United States and completed his undergraduate degree at Howard University in Washington, D.C.. He attended Howard University College of Medicine to earn his medical degree and also to do his residency. While in Washington D.C., he became friends with a group of fellow Jamaicans. This group became some of his closest friends and were like family to him. Vincent married Bonnie Lubsey (nee Gray). This union was blessed with three children, Vincent Jr., Andrew and Erika. Vincent with his wife and children moved to Milwaukee, Wisconsin and he started an independent family practice, which eventually became Lubsey Medical Center in 1978. Vincent became well established in the Milwaukee community. Later in his life, Vincent divorced. He remarried his now ex-wife Deborah and had two stepsons, Kristopher and Kyle. Throughout the years he touched the lives of many people, especially his patients, but in turn he felt appreciated by them. “I just want patients to have a place to get the care they need,” said Vincent in an interview a month ago. “I feel appreciated, I get so much more from my patients than they know.”