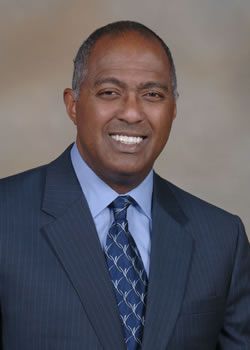 Dr. Hugh E. Mighty has been named the 18th Dean of the Howard University College of Medicine and Vice President of Clinical Affairs. Dr. Mighty succeeds Dr. Edward E. Cornwell, III, who has served as interim Dean since October 2014.

Dr. Mighty joins Howard University from Louisiana State University (LSU) where he served as Vice Chancellor for Clinical Affairs and Professor of Obstetrics and Gynecology in the LSU School of Medicine. Dr. Mighty will oversee the College of Medicine’s development and growth of its academic programs; effective development and relations with students, faculty members, alumni and the other schools and colleges in the University; and provide oversight for the administrative and financial operation of the College of Medicine. Mighty will also serve as Vice President of Clinical Affairs, having oversight of the relationship between the academic enterprise and the hospital and responsibility for the development and direction of the Faculty Practice Plan. He will also serve as professor on the faculty in the Department of Obstetrics and Gynecology. Dr. Mighty will report to Dr. Michael Winston, Howard University Provost and Chief Academic Officer.

Dr. Mighty has a long history of leadership working to create lasting positive change at the institution and community level. During his tenure at LSU, Dr. Mighty guided the financial and strategic direction of the academic and hospital enterprise, including three safety-net hospitals in the state. He is known for developing innovative statewide initiatives, such as telemedicine to offer obstetrical services to high-risk pregnant women in rural areas of Maryland and the Tamar’s Children initiative to defer incarceration for pregnant women with minor offenses in exchange for the development of job and parenting skills. Dr. Mighty has also served in multiple public leadership roles, including Chairman of the State Commission on Infant Mortality Prevention for the state of Maryland.