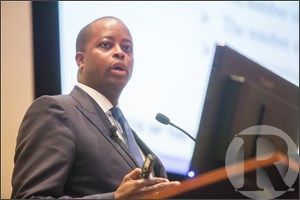 Despite some progress, there still is racial disparity among medical students and unconscious biases remain when it comes to health care, according to Howard University’s president.

Dr. Wayne A.I. Frederick gave a lecture Monday at East Carolina University Heart Institute, where he discussed work to eliminate those disparities in STEM, medical and health fields and address biases.Though a shortage of physicians is a chief concern today, that has not always been the case, Frederick said.

In 1910, Abraham Flexner published a study called the Flexner Report, in which he evaluated medical education in the United States and Canada and gave suggestions. Flexner recommended entrance requirements, a reduction in the number of medical schools and a decrease in the annual output of physicians from 4,000 to 2,000.“To be quite frank, his intent was to reduce the physicians supply, because they felt that there were too many unqualified physicians,” Frederick said. “As a result of this report, the landscape of medical education changed very significantly. I think it’s important for us to recognize that because the impact that had on diversity ...”

Prior to the turn of the century, seven medical schools existed for students of color. That number decreased to two after the Flexner Report. Today, there are four.

“Between 1920 and 1964, less than 3 percent of students entering American medical schools were black, and unfortunately I can say today that number hasn’t changed,” Frederick said. Less than 7 percent of students enrolled in U.S. medical schools during the 2015-16 year were black, according to a report from the Association of American Medical Colleges. By comparison, nearly 21 percent were Asian, and 54 percent were white.

Frederick said unconscious biases also remain. He referred to a study in which Johns Hopkins University School of Medicine students were presented different scenarios, including one that involved a white tollbooth collector and a black lawyer. Results showed the students favored the white tollbooth worker in several categories, including patient reliability and trust.“One of the things that this study found was that implicit racial preferences are present, but these do not affect their critical decision making,” Frederick said. “That is a very important outcome as well because it means that we have an opportunity to mold these young students in such a way that they will ultimately do the right thing in terms of what we expect them to do.”

Frederick said he applauds ECU’s Brody School of Medicine for its work.“Because when you look at the national average and who is getting into those communities that are underrepresented, you clearly have demonstrated a strong commitment to do that,” he said.

Frederick said with the disparities that exist, mentoring and feeder programs that encourage students to pursue careers in STEM fields are key. He said historically black colleges and universities also play a role in advancing diverse pipelines in STEM. Those colleges and universities produce 20 percent of blacks in all STEM disciplines and are responsible for 34 percent of the blacks who receive bachelor’s degrees in physics, chemistry, math and biology, Frederick said.