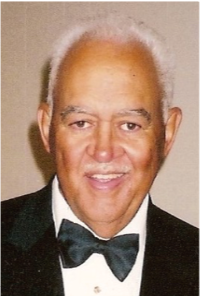 Lorenzo, as he became to be known, applied to Howard University and received a Bachelor’s of Science Degree in 1951. During his college years, he was active in student affairs. His involvement included being President of Alpha Phi Alpha Fraternity and a member of the Student Council.
During his freshman year he met Romaine Smith, whom he married several months after graduation. He subsequently became a proud father, and he and Romaine raised two children during their more than 25-year marriage prior to her passing.

Dr. Walker studied at Howard University’s Medical School from 1951 - 1955.  While in medical school, he served as Class President and also became a member of Alpha Omega Alpha and Kappa Psi Medical Societies. After graduation, he became the only African-American out of 108 interns at the Philadelphia General Hospital. Then he served for two years as a Medical Officer in the U.S. Navy, where he tended to the injured and infected during the Korean War. He holds the permanent rank of Lieutenant Commander.

Dr. Walker set up a family practice in West Philadelphia where he practiced until 2006.  He loved his patients and they loved him. During this time, he served on the staff of the St. Ignatius Nursing Home for 37 years and as Medical Director of the home for more than 25.  Prior to his retirement, he became Clinical Care Associate with the University of Pennsylvania Health System and a Clinical Associate with the University of Pennsylvania School Of Medicine.

In 1977, Dr. Walker received the Legion of Honor Award presented by the Chapel of the Four Chaplains. He was also named among Who’s Who in Black America and received honors from the Alpha Omega Medical Honor Society and Kappa Phi Medical Honor Society. In 1979, the Philadelphia County Medical Society named Dr. Walker, Practitioner of the Year, making him the first African-American to receive this honor.   In 1986, he received the same honor from the National Medical Association. In 1989, he received the Mercy Douglass Lectureship Award for Outstanding Service. In 1990, he also received the President’s award by the North Philadelphia chapter of the NAACP.
Dr. Walker was the first African-American President and member of the Yeadon Pennsylvania Board of School Directors. He was a member of the National Medical Association for 41 consecutive years and is a former Honorary Trustee of the first Baptist Church in Darby.

Dr. Walker became reacquainted with Joan Carter Parks, a widow, who he knew at Howard University. They dated, became married in 1980 and settled in Cherry Hill, New Jersey. They enjoyed each other immensely.  After retirement, they settled down to a quieter life. They enjoyed eating out, socializing with friends, and spending time in Florida with and near Joan’s family. Dr. Walker remained active in a number of social and community organizations. He was a member of Alpha Boule, the Guardsman and the Ashanti groups and had served in leadership positions in each.

Dr. Walker had artistic leanings during his youth. He later learned golf and loved to play weekly with close friends.  He always carried his pocket camera, which he used to take pictures at all social events, which he then sent happily to his subjects.

Saddened by his loss are his wife Joan of 36 years, a brother Charles, three children, several grandchildren and great-grandchildren, and a host of relatives and friends.