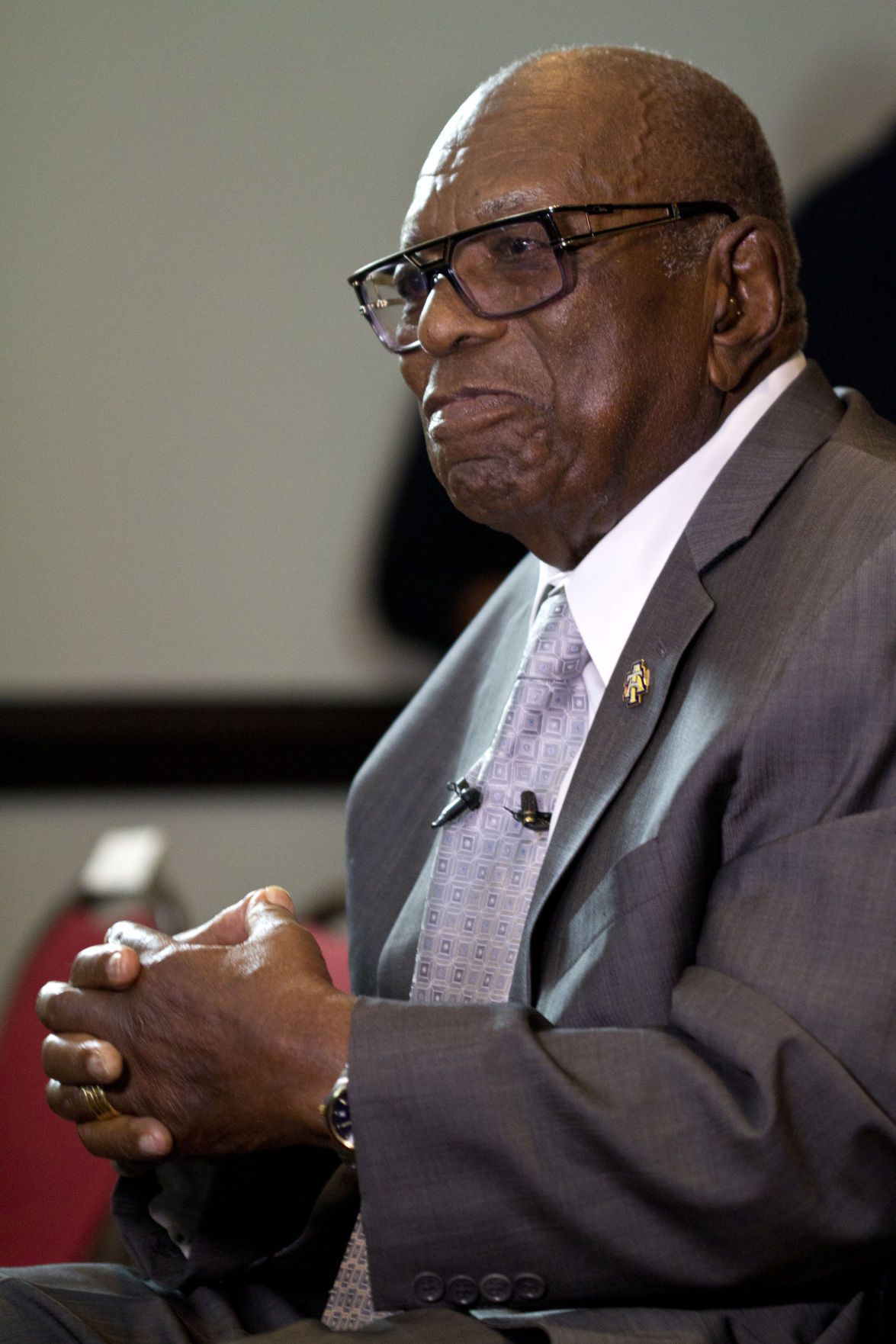 Dr. Alvin Blount, 94, who died January 6 2017, left a legacy found in legal books, but also through people whose lives he touched.

Blount is best known as one of the plaintiffs in a federal lawsuit that desegregated Moses Cone and other hospitals. In the 1962 landmark Simkins v. Moses H. Cone Hospital case, the doctors found a legal loophole through the federal Hill-Burton Act, which said federal dollars for public facilities could not be used to discriminate. The 4th Circuit Court of Appeals agreed. When the U.S. Supreme Court refused to hear the case, it hastened the integration of hospitals for African American doctors and their patients. The case was considered as important to integrating hospitals as Brown v. Board of Education was to integrating schools.

Blount would be the first black doctor to operate at Moses Cone. He remembers performing that first gall bladder surgery, partly because of the “Glad to see you” and “Bless my soul” comments he heard from the black nurses and custodians who were working that day. Cone Health System officially apologized to Blount last year. A historical marker honoring the case stands on North Elm Street, adjacent to Moses H. Cone Memorial Hospital.

But Blount wasn’t waiting on an apology.“We knew L. Richardson did what it could with what it had, but that wasn’t enough,” Blount once told the News & Record of L. Richardson Hospital, where black people were treated at the time. Back then, the newer Moses Cone had all the latest instruments and equipment. But as the lawsuit argued, it excluded black doctors and dentists.“It resulted in a stronger local health system ... once you got race out of the way,” Blount said.

Blount, who grew up near Raleigh, was a 1943 graduate of N.C. A&T. After medical school at Howard University, he served as chief of surgery for a M.A.S.H. unit in Korea where he was the only black doctor on the medical teams made famous by the movie and TV show. He worked shoulder to shoulder with white surgeons and found that he was as qualified as they were.That made it more difficult to come back to the United States and deal with segregated hospitals and a segregated society.

Blount and his wife, Gwen, a Bennett College alumnus, raised seven children as he built a practice here. She died in 2009. “My daddy was a gentle soul who wanted to do right by everyone,” said Gwen Blount Adolph, who is now a New York attorney.

When reached by phone, Adolph recalled the night the arm fell off brother Alvin III’s “bruised and battered” teddy bear, which he took everywhere. Alvin was inconsolable, and Gwen, who had over time restitched much of the stuffed animal, wasn’t home. “We all have this vivid memory of my dad taking needle and thread and operating on Teddy,” Adolph said. “We all gathered around, as if in an operating room. He was so patient and it was so important to my brother. It was as if everything else in the world had stopped. “That was Daddy.”

When others needed him, Blount had a similar response. When he was a student at A&T, young Otis Tillman needed a physical for his application to medical school but had little money. A classmate took him to see Blount.“He didn’t charge me anything. He told me he was proud to do it,” said Tillman, who attended Howard University, where Blount got his degree, because the medical schools in North Carolina were still segregated.

Tillman, now retired from practicing in High Point, said he has come across few people with Blount’s level of character. “He has left a mighty fine legacy,” Tillman said.When Dudley High School students were arrested during a 1963 civil rights demonstration, Blount and his wife fed them — and the jailers, too — while the bonds were being processed. Because of his kids, lots of young people from the neighborhood were in and out of his house and Blount always encouraged them to study hard. He overpaid a neighborhood kid to do odd jobs, like cleaning Blount’s office. The young man, Richard Peace, was struggling to pay his way through A&T. “He said, ‘Richie, I’m going to tell you something. We’re going to get you through this. You’ve come too far,’ ” recalled Peace, a retired Air Force lieutenant colonel and financial planner, during one of the many ceremonies honoring Blount over the years.

An unofficial adviser to past A&T presidents, Blount raised millions of dollars for scholarships while leading the N.C. A&T Foundation and was awarded the highest honor for alumni. Blount was also awarded the inaugural Distinguished Service Lifetime Achievement Award as part of the United Way of Greater Greensboro’s African American Leadership Series. The Evans-Blount community health clinic in southeast Greensboro bears his name.

Blount kept up his medical certifications. After going to specialists from time to time, Frye, the first black man to serve as chief justice of the state Supreme Court, would still call Blount. “Before I did anything, I would check with Dr. Blount,” said Frye, also his Kappa Alpha Psi fraternity brother. “His mind was still very sharp.” Frye served with Blount in other organizations and said he was always a strong leader with great suggestions.“Sometimes,” Frye said with a laugh, “it would be more work than you wanted to do.”