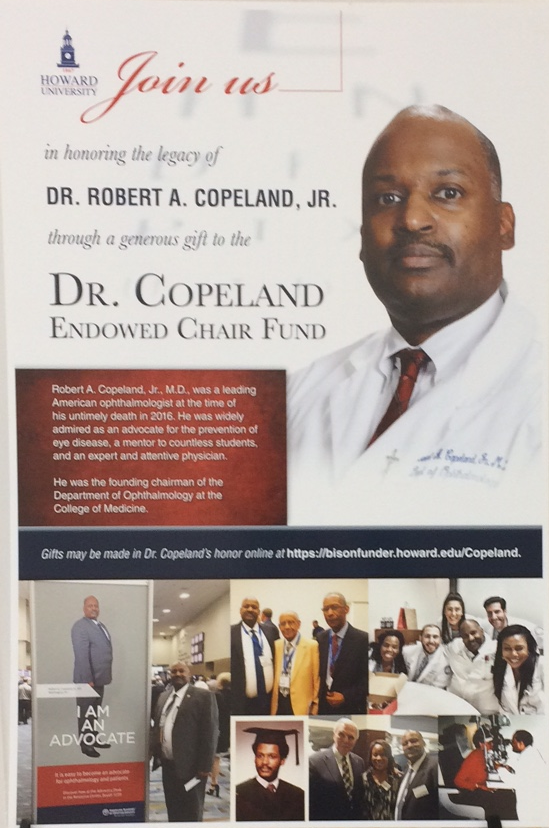 On January 22, 2018, Dr. Leslie Jones, Chair of the HUCM Ophthalmology Department, hosted a reception to honor Dr. Claude Cowan, Jr.,  Class of 1972, and to provide friends and alumni with an update on the campaign to endow the Dr. Robert Copeland Chair in Ophthalmology. Dr. Robert Copeland arrived at Howard as a resident in 1982 and worked his way to becoming chair of the department. He led the Ophthalmology Department admirably for 30 years and trained over 70 residents. He passed away in April of 2016.

Dr. Jones also provided friends and alumni with a brief history of the Ophthalmology Department. Dr. Jones noted that in the 1920s, the department was not actually considered a department, but rather a clinic or division. In 1946, the ophthalmology residency program was started and the first resident was Dr. Pearl Watson. The department was formally recognized as a department on January 20, 2000 and now hosts 3 residents per year. Dr. Jones emphasized the department's long tradition of eye disease treatment among the African-American community, including the treatment of diabetes and eye disease in people of African-descent. Dr. Jones also pointed out that while the hospital was still known as the Freedmen's Hospital, it included a glaucoma center, a project spearheaded by Dr. Claude Cowan, Sr. Today, Dr. Jones is researching whether diabetes influences glaucoma. After some historical research, she found that Dr. Cowan, Sr. worked on a similar project in the 1960s.