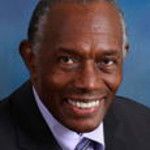 Dr. John PA George III, ('70) came to the U.S. from Grenada in 1963 to attend Howard University. His intellectual prowess was evident from his early days as a student. In 1966, he was the recipient of an award from the Caribbean American Intercultural Organization for being the highest graduating Caribbean student in the District of Columbia. In 1970, the same organization recognized him as the highest graduating Caribbean medical student in the District of Columbia.

After graduating from medical school, Dr. George embarked on a career in obstetrics and gynecology. He is renowned for the boundaries he broke and the procedures he helped to pioneer in the U.S. and abroad - especially in the Caribbean. Early in his career, he was a member of the team that performed the first laparoscopy (a surgical diagnostic procedure used to examine the organs inside the abdomen) at Howard University Hospital (HUH). Of this achievement, Dr. George noted: “I participated in the first laparoscopy that was held at Howard in 1971. My chief resident and I read the journals and learned what was going on in Europe. We figured we could find a way to utilize some of the basic equipment we had at Freedmen's hospital to put some things together to do the first laparoscopy. “

This procedure influenced Dr. George’s passion and practice throughout his career. He was able to help introduce it to the wider Howard University medical community, as well as several countries in the Caribbean, including Jamaica and St. Lucia. He also introduced the procedure to the medical community in Ethiopia.

Dr. George has also been a teacher. Throughout his career he has endeavored to share his expertise and knowledge with others. This is consistent with his goal of helping others to maximize their potential. “There are so many people who have brilliant, brilliant minds, but they never had the opportunity. So I embraced the opportunity to try to elevate them,” he said.

Dr. George has had a distinguished career. He was the Director of Gynecologic Endoscopy at the Washington Hospital Center (1992- 2010) and Assistant Professor at Howard University College of Medicine (1982-20020). He was also the head of the Division of Obstetrics, Dept. Ob/Gyn, at Howard University’s College of Medicine. He is the founder of Metropolitan Ambulatory Care Associates, and Metropolitan Ambulatory Surgery Center, both in D.C. He has also received many awards for his professional and charitable contributions. This year he was slated to be honored as a member of Howard University’s 50th anniversary class of graduates.