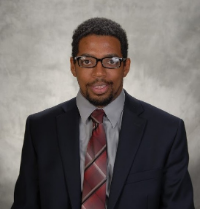 David Woods, native Washingtonian, is a current MS2 at Howard University College of Medicine who was born in Howard University Hospital and has spent time living in each of D.C.’s four quadrants. He is a nontraditional student who enrolled in undergraduate school at Cornell University in 2001 with the intention of being a pre-med student. While there, he became involved in medical research, and after graduating in 2006, he decided to join a small contract medical research firm rather than attending medical school. After two years at the small firm, he was able to transition to a research position at the National Institutes of Health (NIH). While working at NIH, he was featured on several research publications and simultaneously earned his master’s degree in Biotechnology. After spending nine years at NIH, he enrolled at Howard University College of Medicine.

David is not yet committed to choosing a specialty but completed his first-year preceptorship in geriatrics and felt fulfilled. “I really look at which population needs the help, and want to contribute there,” says David. He now serves as the Vice President of his class, a MedSTAR leader (tutor for preclinical students), treasurer of the student council, member of the oncology interest group, and co-founder of the health policy interest group. The health policy interest group was founded earlier in the year and has seen membership explode due to students’ interest in lobbying the D.C. City Council to include Howard University in the East End Health Equity Act.

David says that he would not have been prepared to enter medical school directly after undergraduate school and feels that the time he took to mature and gain work experience has been crucial to his ability to distinguish himself and become a leader. Regarding the city’s East End Health Equity Act, he says, “I’m fearful of public speaking, but I knew I had to speak up because it affects my neighbors, Howard, and my family.” David was one of several students who attended the city council meeting on December 4th and helped to organize and encourage other students’ attendance as well.

“I was so impressed by our student body because current students likely wouldn’t be affected by this deal. I’m thankful for the student population who got engaged to keep the Howard legacy alive well past their own graduation,” says David. He is also very grateful for the alumni who have lobbied for the inclusion of Howard University in the East End Health Equity Act. “Our student body is as active as it’s ever been, and we are appreciative of everything the alumni do for us and the example they continue to set,” he says.

David’s proudest accomplishments include being the first one in his family to attend college and starting a tutoring program at his church that has grown considerably. “I don’t have much to give back, but education is something I always can give back,” he says. His goals for the next few years include honing his medical knowledge and deepening the relationships that he has built at the medical school. “I plan to take advantage of the opportunities and good fortune that have been bestowed upon me and give back to a community from which I have taken so much. Ultimately, I would like to not only continue the legacy that Howard has cemented, but to advance it further by becoming one in a long line of caring, and competent health care professionals. I hope to not only earn my degree, but to live up to its expectations,” says David.