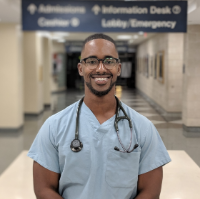 Harry Nonez is a current third year medical student and native of Brooklyn, NY. He has been interested in medicine since well before undergraduate school. His interest in medicine began when he and his cousin were involved in a car accident. After an SUV ran a red light and hit the side of their car, Harry realized that although he was not injured, his cousin had a deep neck wound. He remembers being in shock but thinking only of having to stop the wound from bleeding. He applied pressure to the wound with his shirt and waited for paramedics to arrive. He was later told that he had helped to save his cousin’s life, and his resulting sense of fulfillment was the moment he first realized he wanted to be a doctor, specifically an emergency physician.

While in high school, Harry had the opportunity to shadow an emergency room in New York that helped develop his interest in emergency medicine and piqued his desire to pursue a career in providing urgent care to the underserved. He recalls witnessing compassionate, yet efficient care that was most apparent with psychiatric homeless patients in the ER. He remembers helping dress a homeless man’s abscess, a moment that he associates with becoming very aware of the needs of the disadvantaged and understanding the importance of humanistic medicine. “I have a heart for the underserved due to my own socioeconomic struggles--being raised by a single mom, as well as my belief that healthcare providers have a duty to help all patients regardless of their circumstances,” says Harry.

Due to limited funds to support his education, Harry has actively sought out opportunities like working as an RA in undergraduate school and applying for HUMAA scholarships to be able to support his own dream. In March 2018, Harry received the Drs. Beverly Davis and Michael Sanders Award ($2,500). “Without financial assistance, affording my schooling would be impossible,” says Harry. “Giving back really does help alleviate the financial burden,” he says. “To know that people recognize all the hard work you’ve put in, and to know that you’re appreciated is truly uplifting.”

Now that Harry is in his third year at the College of Medicine, he hopes to continue challenging himself through leadership opportunities and encouraging minority youth to pursue a career in medicine. His long-term goal is to become an exceptional ER physician primarily treating the underserved. He recognizes the importance of making a positive impact on those around him and plans to take action by contributing to medical research and by serving as an advocate for students from underserved communities. He understands that goals are something that are worked towards every day, so he keeps a busy schedule by serving as the President of the Emergency Medicine Student Association (EMSA). He is also working on a research paper that explores the adolescent mind, how social media plays a role in shaping it, and how social media perpetuates violence.

In his role as President of EMSA, Harry has frequently organized trips for the group to visit community high schools to teach students about emergency medicine. He is especially proud of a workshop held in which he and other medical students taught high schoolers how to suture and dress a wound. "That exposure at a young age can really impact their thoughts on medicine," he says. Harry is grateful for the fact that his educational, personal, and career goals are within reach, and he looks forward facing the challenges ahead and fulfilling his aspirations with the support of his fiancée, mother, and friends.